Automobiles put about a third of a billion tons of CO2 into the Earth’s atmosphere Each year.

https://www.livestrong.com/article/156537-facts-of-car-pollution/
https://www.epa.gov/ghgemissions/global-greenhouse-gas-emissions-data
Other sources point out that humans put 40 billion tons of CO2 into the world atmosphere overall. The mass of the atmosphere is 5 quadrillion tons. It was in balance naturally before the additional greenhouse gasses were added by humans, such that it could sustain life. Humanity arose in intelligence within an oxygen-rich atmosphere with lower carbon dioxide levels. Adding powerful greenhouse gasses, increasing CO2 and decreasing the percent of oxygen isn’t good.
http://www.slate.com/blogs/bad_astronomy/2014/08/20/atmospheric_co2_humans_put_40_billion_tons_into_the_air_annually.html
Human polluters also release extra nitrogen and reactive hydrocarbons.
The oceans absorb and remove CO2 from the atmosphere and store it, yet storage space is limited- like that of a computer hard drive or ssd. When it it full the stuff just stays elsewhere. In the meantime the oceans become more acidic as CO2 reacts with ocean water. That is bad for shellfish and sea life generally.
https://interactiveoceans.washington.edu/story/Carbon_Cycle
Apparently the ocean has  sucked up a lot of that human produced CO2 since the Industrial revolution began- more than 550 billion tons. The Smithsonian says that each day it is getting a quarter of the CO2 produced by coal burning plants- so hurry up and kill off the oceans, Alfred E Newman might blunder…it’s a place where commie pinkos hide out. Oceans have become; “30% more acidic in the past 200 years”. What- me worry?
https://ocean.si.edu/ocean-life/invertebrates/ocean-acidification
image credit: N.O.A.A. 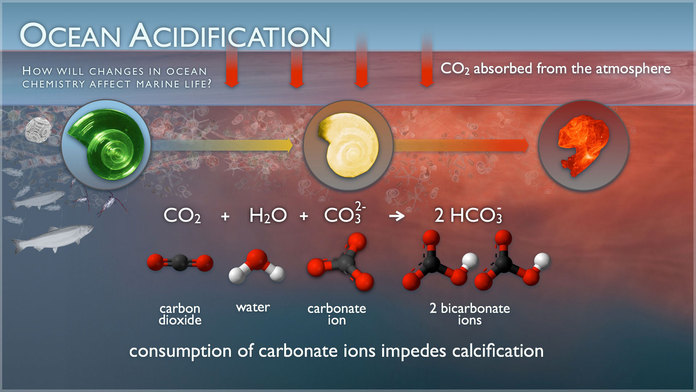