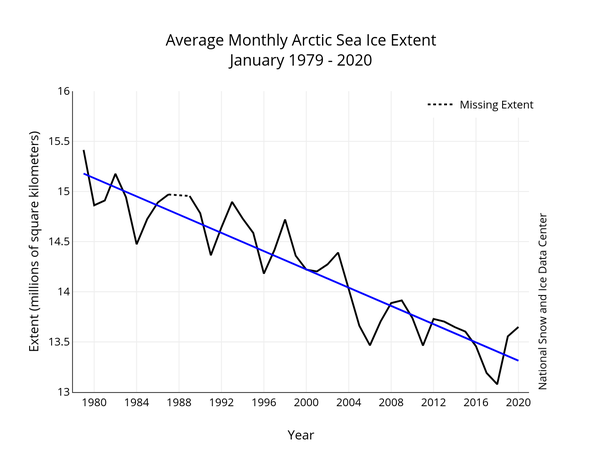 The farther north one goes the greater is the increase in annual heating. Alaska for instance is much warmer than it was in former centuries. Human pollutants and exhaust emissions are the primary agents of change. Fossil fuel burning is the main cause of greenhouse gases in the U.S.A. with industry being a close second.

It has been reported that with Arctic permafrost melting there is a potential for release of greenhouse gases trapped in it. There have also been reports that emerging microbes would eat gases such as methane before it reaches the atmosphere. Tundra fires of dry vegetation could release toxic metals trapped in the muskeg that fell from industrial pollution in the atmosphere. Fires could release mass quantities of CO2 etc speeding up the pace of global atmospheric heating.

Everything you should know about methane as regulations loosen

The Arctic ice cap is melting away and shrinking to a smaller size with each passing year. It may be gone entirely in summers eventually (maybe in 20 -30 years). The old Arctic ice with many years of life is nearly gone. With an open Arctic ocean in summer the Arctic ocean absorbs more sunlight and a vicious cycle of warming increases persists.

Unfortunately it turned out that human activities produce 40 percent more of the world’s methane than was believed previously. Methane is 28 times more powerful than CO2 as a greenhouse gas. It lasts just a decade so if humans quit adding methane to the atmosphere that would help slow the pace of development.

I should say that I am more concerned with ocean acidification than greenhouse gassing, yet each are empirical threats. Earths era of photosynthesis and oxygen increase began in the oceans a billion years ago.

The Most Powerful Evidence Climate Scientists Have of Global Warming

People that are comfortable don’t sometimes don’t want to think about global warming or consider it a hoax. They are something like ostriches regarding danger. Many people have 4 to 6% Neanderthal or Denisovan genes. Neanderthals were found to have bred with an extinct hominid that branched off from the human line 2 million years ago. So it isn’t too surprising to me that some people regard global warming as a host though more than 90% of scientists regard it as fact.

Recently a fellow that believes the world is flat launched himself to a homemade rocket and crashed it to death in the desert; he was trying to get high enough to see if the world is really curved. Personally I can see the world’s curvature from a boat on a large body of water, or from a jet looking out a window at 32,000 feet. One could regard a round world as a hoax I would guess, if one didn’t get up high enough for-oneself to see it. Global warming shouldn’t be harder to believe than a nearly round Earth.

There probably were people that didn’t believe that germs exist some decades after scientists discovered them. There is often a time lag between scientific discovery and popular acceptance of a true opinion. Actually there are numerous wrong beliefs pervasively held in societies today. I am surprised how many misinterpret the book of Genesis, including scientists. Christians may misunderstand eschatology and believe that the 1st century tribulation that Jesus said would occur before the generation living was entirely passed was not actually the tribulation. Jerusalem was destroyed by the Romans in 70 C.E. and the Christians scattered. Some just require a wrong opinion to be true because that is all they know.

Global warming is just one problem. A general failure to upgrade human economic infrastructure from the evolved way of non-sustainable technique need be changed to one based on ecological economic principles and practices. Mass extinction of life on Earth in progress need be stopped and reversed. Habit loss needs to halt. Human dwelling forms and theories need to adapt to so many people occupying and destroying the world ecosphere. The problems are nearly self-evident nearly to those that are not blind.

Ecological economics need be insinuated within the existing infrastructure and with the use of free market tools and directed regulation reform that leads to the natural selection of business practices that are not harmful to the ecosphere.

People misunderstand political philosophy and don’t comprehend Marx of Adam Smith well enough to know that they offered just their best ideas for the age rather than golden tablets for economic rules passed down from on high and valid for all times. People don’t comprehend what Mussolini’s political philosophy of corporatism was or how it works today and why wealth is so concentrated that political adaption to ecological economics is on a worst case track. One must enjoy a cool breeze while one can, and mild northern winters too.